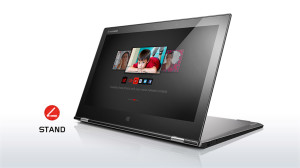 The most compelling hybrid laptop/tablet on the market today is the Lenovo ThinkPad Yoga. It has just the right combination of power, heft, and size to satisfy almost any user.

The touchscreen capability of Windows 8(.1) actually feels natural on the Lenovo ThinkPad Yoga. That’s because the display is always close at hand.  The weakness of Windows 8(.1) on most current desktop set ups is that: the monitor is not easily in reach; older displays are not touch-enabled.

Lenovo’s ThinkPad Yoga comes with a full version of Windows 8(.1). So, any program you are accustomed to using can be installed. These would include: Microsoft Office, QuickBooks, games, graphics editors, and video applications.  Tablet apps developed for Windows 8 can also be downloaded and used, including Angry Birds or Skype.

The ThinkPad Yoga’s screen is highly responsive to touch. The keyboard is comfortable. And the versions sporting the Intel Core i5 or Core i7 processors run Microsoft Office and other typical business applications very nicely.  Because the storage is solid state rather than a typical hard drive, the boot-up, program start-up, and file access is very fast.

All the apps are sprightly, and gaming is satisfying.

Despite the horsepower under the hood, the computer doesn’t get hot, just a little warm.

Price: Configurations for the Yoga start at $1,049.

Take a look at the complete spec information.

The Lenovo ThinkPad Yoga offers the user a range of ways to view information on the screen. There are four modes:

It’s actually fun to rotate the screen 360 degrees to use the computer as a tablet – checking out the various options along the way.

Bigger than the iPad, but not Clunky

The ThinkPad Yoga is unquestionably larger and heftier than an iPad. Nevertheless the Yoga is comfortable to use as a tablet.  Resting on one’s arm, fingers hooked over the screen’s frame, it’s easy and natural to fall into tablet mode yourself. 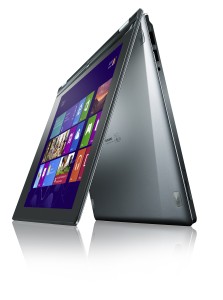 This is real innovation from Lenovo, which purchased the ThinkPad brand from IBM in 2005.  ThinkPad laptops have always been very robust and well made. But when it comes to style and appearance many have considered them behind the times. In other words: great for business, but not innovative or chic.   The Yoga breaks the mold and should be considered a trend setter.

At Bergen IT we have been recommending ThinkPads for years. They are reliable and resilient in the field.  We find many more aging but active ThinkPads in users hands than any other laptop brand.  In our opinion, this makes Lenovo the Honda or Toyota of the laptop world. The company’s computers are a good investment that provides great value and usability for the price.

How About the Competition?

The Lenovo ThinkPad Yoga isn’t the only hybrid laptop/tablet on the market. Microsoft, Dell, HP, and Acer all have good products to consider. Read more.

Bergen IT is a client-centered, comprehensive tech support and strategy company for businesses, professionals, and homeowners. The company services customers in the NJ and New York City metropolitan area, including northern New Jersey (Bergen, Essex, Hudson, Morris, and Passaic, NJ), Manhattan and the Bronx, Rockland and Westchester, and can remotely assist clients across the country.