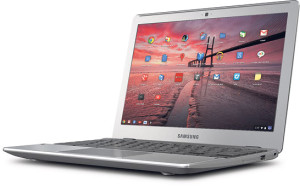 Manufacturers of the Google Chromebook laptop are making a big push this season to sell a range of these inexpensive laptops to the public.  At prices between $250 and $350, they should easily compete with tablets.

What Is a Chromebook, Anyway?

Chromebooks are not your typical laptops.  They run Google’s Chrome OS instead of Windows or Apple’s OSX and have very limited storage. Chromebooks require an internet connection to run apps and to access or store files in the cloud.

So Chromebooks are actually a lot like tablets – but with the basic configuration and functionality of laptops.  Certainly a wireless keyboard can be added to a tablet. But the reality is that most compatible keyboards are cramped and uncomfortable for the touch-typist who spends a lot of time in front of the screen. The Chromebook has a standard-sized keyboard with a much better touch experience.

Who Benefits Most From Chromebooks?

The Chromebook could be a great computer for you, if:

Who Won’t Benefit From the Chromebook?

The Chromebook will be a serious disappointment if you’re:

So Will the Chromebook Kill the Laptop?

At first glance the Chromebook’s low price point would suggest that the “traditional” laptop’s life expectancy will be short. But look again. The biggest loser might in fact be the tablet as we currently know it. After all, tablets have similar functionality, but still require hunting and pecking to write.

So for now at least, people needing the functionality of a tablet but with the keyboard of your typical laptop will be happiest with a Chromebook.

Need assistance with computers or audio in your home or business? Contact us.