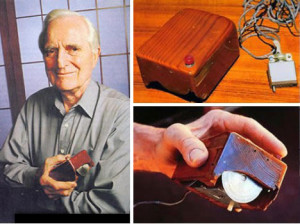 Douglas Engelbart and his pioneering version of the computer mouse.

Douglas Engelbart died this week at the age of 88. He was the inventor of the computer mouse and a computing pioneer.

While at the Stanford Research Institute (SRI) in the late 1950s he came up with the idea of using a wooden rolling hand device to help computer professionals who at the time were working with gigantic computer equipment and punch cards.

Engelbart was part of the team that developed ARPANET, a network of computers that preceded the Internet in the late 1960s and early 1970s. He also worked on and was a strong believer in the concept of “groupware,” or digital collaboration. In 1968 he was one of the first to demonstrate on-screen video teleconferencing.

“I have admired him so much. Everything we have in computers can be traced to his thinking,” Steve Wozniak told ABC News. “To me, he is a god. He gets recognized for the mouse, but he really did an awful lot of incredible stuff for computer interfaces and networking.”

Ironically with the rise of the tablets and smart phones, the mouse is starting to give way to the finger swipe. But without Engelbart’s visionary thinking – as well as the thinking of so many others – it’s doubtful that the power and capability and options available on the tablet would be available to us at all.