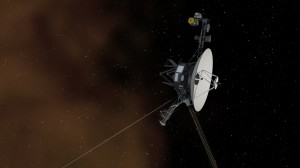 It’s official: Voyager 1, launched by NASA in 1977, has been declared the first human object to reach interstellar space.

Voyager 1, launched in 1977, is the first human object to leave the solar system and reach interstellar space — over 11 billion miles from our sun.

State of the art when it was launched, Voyager 1 has 69.63 kilobytes of memory.

For comparison, an iPhone 5 with 16 gigabytes of memory has about 240,000 times the memory of the Voyager spacecraft.

Think about the power in your hands the next time you reach for your smart phone. And then think about that little spacecraft flying through the darkness, exploring new frontiers.

A new NASA photo captures the radio signal from Voyager 1 as a pale blue speck in space.

For more go to:

Ever wonder what interstellar space sounds like? Check it out:

Learn about the Golden Record. The disc includes multiple sounds and images of life on earth…as selected in 1977.